2019 marked the fifth anniversary of the Eclipse IoT Developer Survey. This edition is without a doubt the best yet. More than 1700 persons participated; that's about three times more than last year!

As usual, the aim of the survey was to look at the IoT landscape to understand the key trends for people building IoT solutions and identify the relevant technologies and standards. You can find the results of our previous surveys on the Eclipse IoT website.

Our key findings for this edition of the survey are:


A deeper look at our key findings

On a year-to-year basis,  connectivity, performance, privacy, integration with hardware and standards all show significant increases in developer interest.

AWS, Azure, and GCP are the leading IoT cloud platforms

The respondents to our survey identified AWS, Azure and GCP as their top three choices for IoT Cloud Platforms. This ranking reflects wider trends in the Cloud market. Generally speaking, public cloud seems to be making gains at the expense of private Cloud and on-premise deployments of Openstack, Kubernetes and Cloud Foundry. The purchasing flexibility to buy what you need, when need it and for as long as you need it with public cloud platforms likely plays a role when envisioning large scale IoT deployments.

As of April 2019, the four most popular programming languages listed on the Tiobe Index are Java, C, C++, and Python. Our survey demonstrates they are also very popular with IoT developers. However, while C and C++ dominate constrained devices, Java is the first choice for edge nodes and IoT Cloud platforms. 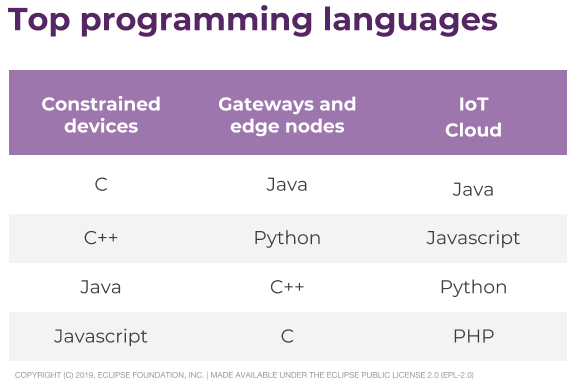 JavaScript has a strong showing, probably due to the widely used Node.js runtime. In addition, the fact that PHP made the top four for IoT Cloud platforms is unsurprising, since it is commonly used to build the back-end of large Web development projects.

When asked about which communication protocol they use in their projects, about half of the respondents mentioned HTTP. This is unsurprising, given the huge role REST web services play in most IT architectures. However, HTTP has not been designed specifically for use in IoT.

Focusing on IoT-specific protocols, 42% of respondents mentioned they leverage MQTT, about three times more than CoAP. We expect MQTT's dominance to endure, considering its widespread adoption in the market.

The Eclipse Desktop IDE is the leading IoT IDE

It is maybe unsurprising to see the Eclipse desktop IDE to top a survey sponsored by the Eclipse Foundation. That said, the venerable tool is still widely used by all types of developers whether they work in IoT or not. Worthy of note is the strong showings by Visual Studio Code and Notepad++, highlighting the thirst for simpler, nimbler tools. Also, close to 10% of participants mentioned using Eclipse Che. It really seems part of the future of IoT is in the Cloud, one way or another.

Thank you and see you next year!

I cannot end this post without thanking all respondents for participating. We could not make it without you! Please lets us know what you think of the survey, and how we could improve it for next year.

Popular posts from this blog

July 19, 2021
This is a guest post by Alberto P. Martí, VP of Open Source Community Relations at OpenNebula . For everyone in the European cloud market with a passion for open source, these are exciting times. For years, tech journalists and market analysts have been predicting that edge computing was going to bring a paradigm shift to the cloud, and now we are starting to see the form that this disruption is going to take—at least in Europe. Technically speaking, there is little doubt that deploying applications and processing data at the edge comes with a number of benefits, and not only in terms of reducing latency and improving user experience. We are talking about expanding service availability to better deal with infrastructure incidents, reducing data transfers and the energy consumption and security risks associated with them, as well as minimizing vendor dependency by expanding the number of available providers. It comes as no surprise that the European Union has identified edge computing a
Post a Comment
Read more

October 06, 2020
The Eclipse IDE is the project that started it all for the Eclipse Foundation . From the beginning, Eclipse IDE was meant to run on multiple platforms; it now supports Linux, Mac OS and Microsoft Windows. Since it is written in Java, it also supports multiple processor architectures. However, support for 32-bit architectures has been dropped in version 2018-12. This meant recent versions of the IDE would not run on the Raspberry Pi anymore. The introduction of the Raspberry Pi 4 in June 2019 gave hope to Eclipse on Pi fans. With its 64-bit quad core ARM Cortex-A72, the Pi 4 was a good hardware platform to work with. It became even more attractive in May 2020, with the introduction of the 8Gb variant. The Eclipse community took notice of those developments. Version 2020-09 of Eclipse IDE now ships with experimental support for 64-bit ARM (aarch64) on Linux.  Those developments mean embedded and IoT developers can now work on the Raspberry Pi 4 by installing the plugins provided by the
Post a Comment
Read more

Eclipse Amlen v1.0: A Milestone in the Growth of MQTT

May 24, 2022
Over ten years ago, the Eclipse Foundation launched the Eclipse IoT working group . MQTT was one of the pillars of that launch. The first three projects were Eclipse Paho , a collection of MQTT clients, Eclipse Mosquitto , an MQTT broker, and Eclipse Kura , a Java/OSGi solution for IoT gateways that supports the protocol. To say that MQTT is in our genes would be an understatement. Since then, usage of MQTT has grown significantly. Year after year, the simple yet powerful publish/subscribe protocol is the most widely used IoT-specific protocol in our annual developer surveys . For example, in the 2021 edition, 44% of respondents stated they are using it. We like to think we are at least partly responsible for that. By the way, our 2022 survey is currently underway; you have until June 15, 2022, to participate. Click here to share your insights after finishing this post, of course. IBM has been a key player in our MQTT ecosystem for a long time. In 2021, the company brought its commit
Post a Comment
Read more