The Eclipse IDE is the project that started it all for the Eclipse Foundation. From the beginning, Eclipse IDE was meant to run on multiple platforms; it now supports Linux, Mac OS and Microsoft Windows. Since it is written in Java, it also supports multiple processor architectures. However, support for 32-bit architectures has been dropped in version 2018-12. This meant recent versions of the IDE would not run on the Raspberry Pi anymore.

The introduction of the Raspberry Pi 4 in June 2019 gave hope to Eclipse on Pi fans. With its 64-bit quad core ARM Cortex-A72, the Pi 4 was a good hardware platform to work with. It became even more attractive in May 2020, with the introduction of the 8Gb variant. The Eclipse community took notice of those developments. Version 2020-09 of Eclipse IDE now ships with experimental support for 64-bit ARM (aarch64) on Linux.

In other words: it is now possible to code, build, debug and flash directly on a Raspberry Pi 4! 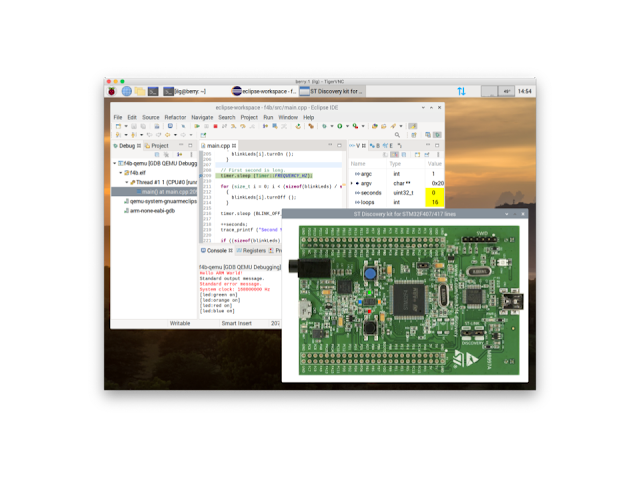 Please visit the project's website to learn more. The recommended configuration is a Raspberry Pi with 8Gb of RAM and a USB SSD.

Popular posts from this blog

July 19, 2021
This is a guest post by Alberto P. Martí, VP of Open Source Community Relations at OpenNebula . For everyone in the European cloud market with a passion for open source, these are exciting times. For years, tech journalists and market analysts have been predicting that edge computing was going to bring a paradigm shift to the cloud, and now we are starting to see the form that this disruption is going to take—at least in Europe. Technically speaking, there is little doubt that deploying applications and processing data at the edge comes with a number of benefits, and not only in terms of reducing latency and improving user experience. We are talking about expanding service availability to better deal with infrastructure incidents, reducing data transfers and the energy consumption and security risks associated with them, as well as minimizing vendor dependency by expanding the number of available providers. It comes as no surprise that the European Union has identified edge computing a
Post a Comment
Read more

Eclipse Amlen v1.0: A Milestone in the Growth of MQTT

May 24, 2022
Over ten years ago, the Eclipse Foundation launched the Eclipse IoT working group . MQTT was one of the pillars of that launch. The first three projects were Eclipse Paho , a collection of MQTT clients, Eclipse Mosquitto , an MQTT broker, and Eclipse Kura , a Java/OSGi solution for IoT gateways that supports the protocol. To say that MQTT is in our genes would be an understatement. Since then, usage of MQTT has grown significantly. Year after year, the simple yet powerful publish/subscribe protocol is the most widely used IoT-specific protocol in our annual developer surveys . For example, in the 2021 edition, 44% of respondents stated they are using it. We like to think we are at least partly responsible for that. By the way, our 2022 survey is currently underway; you have until June 15, 2022, to participate. Click here to share your insights after finishing this post, of course. IBM has been a key player in our MQTT ecosystem for a long time. In 2021, the company brought its commit
Post a Comment
Read more